Being a Woman in the Event Industry in 2021 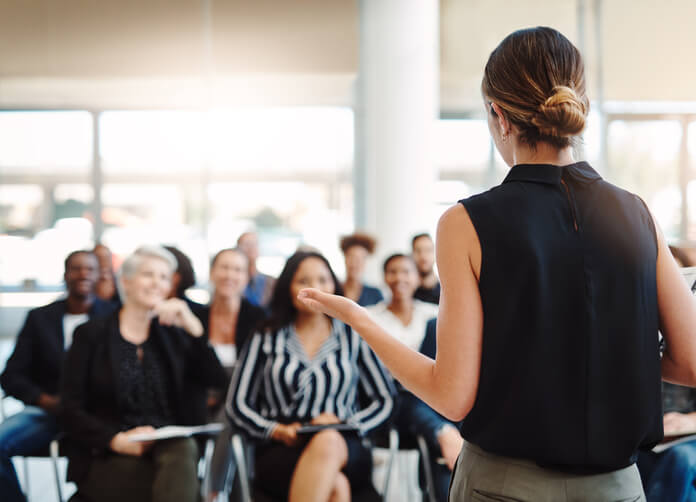 An Interview with the Women Working at Grip

A month ago, the news about dating app Bumble’s CEO, Whitney Wolfe, being officially crowned ‘World’s youngest female self-made billionaire’ took the world by storm. A huge milestone for female entrepreneurs, but also women everywhere. This news once again opened the debate around gender equality in the workplace and our societies in general.

In a world where the number of women in leadership positions is still relatively low–despite women making up more than half of the world’s population and the global workforce–news like Whitney’s opens debates and inspires many. Yet, out of the 559 public companies in the United States in 2020, only 3 are female-led, including Bumble.

It is also worth highlighting the existence of the “controlled gender pay gap.” When a woman with the same job as a man with the same qualifications and employment characteristics, the woman is still paid 2% less for no attributable reason. This controlled gender pay gap has remained the same since 2019, and its closing has slowed in recent years, shrinking by only a fraction of 1%, year over year. It has only shrunk a total of $0.01 since 2015.

Interestingly though, in 2021, more than 80% of the event workforce are women. And the number of women leading event management companies has increased by 40% in the past 3 years. The same survey showed that amongst the over 50 surveyed female managers in the industry, at least 98% confirmed that they have never felt disadvantaged as women in the event management industry.

As a female-dominated industry, all these topics, statistics, and improvements deserve to be a huge topic of conversation and have inspired us to discuss with the women of Grip!

Maria was promoted to Chief Operations Officer of Grip last December. She has been a part of the story of Grip from the early stages and has been the direct manager of many newcomers at Grip.

“I believe in encouraging young people to be the best version of themselves and seek to thrive at what they feel their purpose is or what they’re passionate about.

Clearly, there are representation shortfalls that exist in certain industries and professions. I am passionate about ensuring that we provide the right levels of support, development opportunities, and workplace education throughout our hierarchy to eliminate any negative or discriminatory practices.

Whitney Wolfe’s achievements have become an inspiration for many young entrepreneurs. There remains scope to collectively support women pursuing their professional ambitions and celebrate more female role models and trailblazers like Bumble’s CEO.

At Grip, we have always championed the right person for the right role.

We are proud that this has resulted in an organic ratio of 48% female to 52% male throughout the entire organisation.

From bottom to top, we all work towards the same goals, growing the company together and continually push professional self-development. I speak passionately and unashamedly about this because it’s an area that we should be rightly proud of.

As the COO, it is also my responsibility to continue to build a cultural environment where women feel heard, valued and their individuality is understood. Our management culture is one where we encourage and credit the right work, mentoring and support our team members through visibility, new opportunities, and the sharing of accomplishments.

Our ultimate goal is to manage equitable outcomes continuously, and therefore, we have been proudly sponsoring several Women in Technology events for the past three years and will continue to do so in 2021. This year we are working closely with Dr. Bianka Siwińska, Managing Director of the Perspektywy Education Foundation. It is a great way for us to help promote gender equality in the tech industry and do our part in helping for a positive change.”

Recently promoted to Director of Customer Success, Grip’s most famous ‘Frenchie’ has been a key element in Grip’s fast evolution and is now the manager of 12 (and counting) Grippers and helps newcomers hop on board.

‘As a woman, a sister, a friend, one of the biggest responsibilities and missions I hold myself to is to encourage and teach how feminine sensitivity is a strength and power, which I struggled with at the start of my career. I do not look at women’s equality as a Man versus Woman fight but more as a long-standing siloed belief of gender, race, what we represent, and each other’s role in society… It is these siloed walls that we need to break together to rise as a balanced unity.

As women in leadership at Grip, we are amongst incredible and kind women. I believe in nurturing communication, empathy, and curiosity to build a working ecosystem that enables women and men in different roles, from different backgrounds to work together, feel respected, grow and learn–to drive change together.’

What do the women of Grip think about their condition and status?

“I used to struggle to share my thoughts and express my emotions because that’s how society saw women – that has now changed.

Mental note: Take the risk. Be the kind of person that wants people to up their game. Don’t let the unknown stop you from progressing. I’m more than grateful to be part of a team that values me and motivates me to be the best version of myself!”

“Thankfully, I don’t think I have experienced much gender discrimination in my career/life. However, I have definitely picked up on examples of ‘mansplaining’ during the last few years.

Also, I feel extremely proud that despite being up against predominantly men, I was successful in getting through the group interview process for my exciting new job at Grip!”

“I remember that as a child, I was often called ‘bossy’ for being organised and wanting to take charge of games or projects. I can’t help but think if I were a boy, this would have been seen as being highly engaged’ and ‘showing leadership qualities.’

“One thing that I have experienced at previous employers is not being heard. I could be standing there with several colleagues discussing an event or an issue and was often overlooked or interrupted as if I was invisible.

What I have noticed at Grip is that there is more respect regarding that. The men listen and let you speak. They allow you to speak without interruption and with interest, rather than talking over you.”

Catheren Curry, Project Manager, based in the United States

“I am grateful to have worked for companies within the events industry that value women’s career growth by providing programs such as networking opportunities, mentoring opportunities, and continuing education.”

Casey Pennella, Customer Success Manager, based in the United States

“When I first started working, my then direct supervisor had an onerous project that should have been my job as I was his direct report. However, he gave it to the young man who sat next to me, who had the exact same role as me but was the direct report of someone else. That is a prime example of how sometimes we don’t like the idea of giving a young woman a ‘tough’ job. I am especially proud of Grip, which emphasises maintaining a diversity of people and opinions and gives the space to hear those divergent opinions.”

Allison Rodney, Project Manager, based in the United States

“For the past year, our team has grown from 16 to 70 (still counting), and it is so powerful to see how our company has so many strong, inspiring, creative women in senior positions.”

“I’ve always been very involved in gender diversity projects in previous companies and have learned a lot over the years.

I’ve learned the importance of playing to your innate strengths that might be perceived as ‘typically female’ and not shy away from them. Being you comes from a place of confidence, and conviction and people will respect that.

It’s great working at Grip as we have some fantastic female leadership role models who put a lot of trust in your judgment and professional development. We have a very diverse team with unique perspectives and plenty of opportunities for career advancement.”